You may have heard the term “benefit of the doubt” before, but do you know what it means? The phrase is often used in legal proceedings or in discussions about right and wrong. But where did it come from, and why is it so important?

In this article, we’ll explore the definition and history of the idiom, as well as its modern uses. We’ll also discuss why it is such an important concept for both people and brands.

What Is the Benefit of the Doubt: Meaning and Definition

It's human nature to want to trust others. We want to believe that people or businesses have good intentions, and that they're honest and reliable. Unfortunately, we can't always take people and businesses at their word. Sometimes, we need to give them the "benefit of the doubt."

The "benefit of the doubt" is a phrase that is used to describe the act of choosing to believe that someone is telling the truth, even when there is evidence to suggest otherwise. This phrase is often used in situations where there is not enough evidence to make a definitive determination about someone's guilt or innocence.

What Are the Origins of Giving the Benefit of the Doubt?

The phrase "benefit of the doubt" is also thought to have originated in the English legal system. In Anglo-Saxon law, there was a concept known as "frankpledge" from the early middle ages to the high middle ages. This was a system where groups of 10 families would be responsible for each other's good behavior. If one member of a group committed a crime, the entire group would be punished. Because of this, it was important for members of a group to trust each other. If someone in a group did something that made another member suspicious, they would often give that person the benefit of the doubt and trust them anyway.

The term can also be traced back to medieval times. At this time, trials were often held without any clear evidence being presented against the detainee. Instead, defendants were asked to swear on their honor that they were innocent. While this may seem like an unfair way to determine guilt or innocence, it actually gave defendants the benefit of the doubt since they could not be convicted unless there was clear evidence against them (like being caught committing a crime or having multiple witnesses).

The phrase "benefit of the doubt" first appeared in print and came into figurative use in the 1800s.

The concept of benefit of the doubt has been extended beyond the legal realm and is now used in everyday life. For example, when you can't decide whether or not to believe someone, you might give them the benefit of the doubt. This means that you choose to believe them even though there is no concrete evidence to support their claim.

The phrase "benefit of the doubt" is usually used with the definite article "the". But you might sometimes hear people say "benefit of doubt" without the article. So, which is correct?

The phrase “benefit of doubt” is used in analogy with the phrase "for the avoidance of doubt." When the word “doubt” is used without any definite article before it, it then will refer to "any uncertainty or ambiguity that may arise.”

However, the phrase “benefit of the doubt” is inspired by the legal principle where a defendant is presumed innocent until proven guilty. Here, the idiom is referring to one specific doubt, rather than a general uncertainty; for example: doubting whether a business is being honest when their ads claim their product is environmentally friendly.

So both phrases are technically correct, but in “benefit of the doubt” the article “the” is used to denote a specific doubt that may arise, while in “benefit of doubt” there is no reference to any particular doubt, and instead it focuses on the general idea of uncertainty.

How Is the Term Used in Modern Times?

When meeting new individuals or going out with friends, people tend to assume the best in people until they have proven to be untrustworthy. This is an important principle in our society because it allows us to trust people until they give us a reason not to. Think of a married couple; they will stay married until one of the spouses shows untrustworthiness. Think of the group of friends you know, or an association of neighbors, or college club ... the same rule always applies.

Having said this, 27% is not an insignificant percentage. A big group of consumers is still ready to trust a business with no questions asked.

In court, specifically in criminal matters, detainees are presumed innocent until proven guilty by the prosecution. The benefit-of-the-doubt principle is the backbone of the criminal law system and an important principle of human rights that has protected countless innocent individuals from conviction.

Example Sentences for Using the Idiom "Benefit of The Doubt"

Here are some other examples of how this idiom can be used:

Why Should You Give People or Brands the Benefit of the Doubt?

Why Brands Should Seek the Benefit of the Doubt

At Trust Signals we deliver you news, analysis and advice on brand trust—how to get it and how to keep it. So we couldn’t not write about the importance of getting the benefit of the doubt as a business. As Warren Buffet said: “It takes 20 years to build a reputation and five minutes to ruin it. If you think about that, you’ll do things differently.”

As a brand, one of the most important things you can do is to earn the benefit of the doubt. This means that when people see or hear your brand, they assume that what you are offering is good, trustworthy, and worth their time and money. 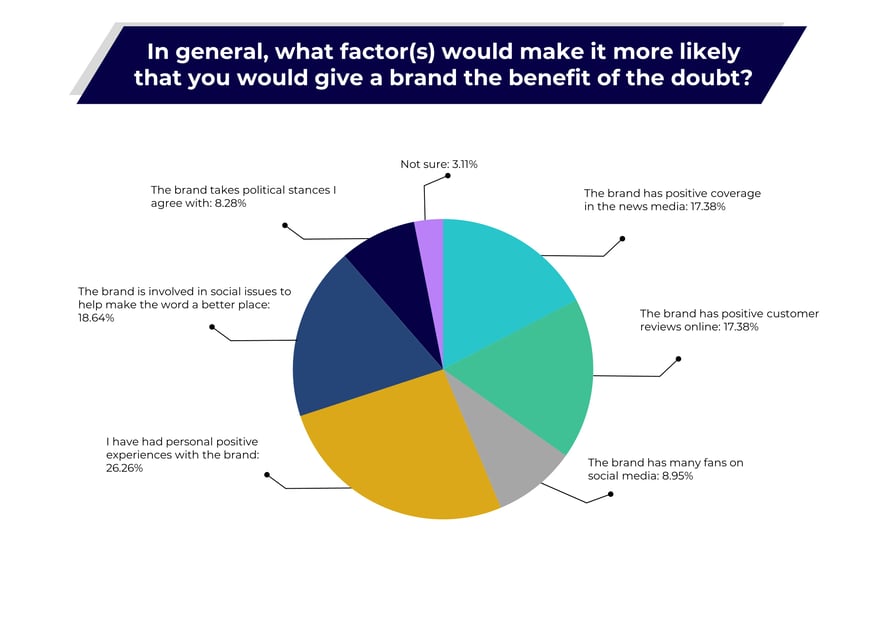 Want to deep-dive into the research we’ve gathered on getting the benefit of the doubt as a business? Check out this blog post.

The benefit of the doubt is a powerful thing. It's the ability to see someone or something in a positive light, even when there's evidence to the contrary. And it can make all the difference in our relationships, both personal and professional. In fact, trust is essential to any business relationship, but it's especially important when it comes to dealing with consumers. Why? Because when consumers trust a business, they're more likely to give it the benefit of the doubt. And that can make all the difference when it comes to things like customer satisfaction and loyalty.

So if you're looking to build trust with your customers, remember that it's not just about being honest and transparent. It's also about making sure you deliver on your promises and always put their needs first. Do that, and you'll be well on your way to earning their trust—and their business.

Perla is a doctoral student at Notre Dame Law School. She loves writing and sharing knowledge with others.

The End of Industry Analysts? Why Review Sites Are Disruptive to the B2B Tech Buying Process

"Traditional analyst firms should be on the watch," TrustRadius CEO Vinay Bhagat told me in a...

Have you ever invested seven precious minutes of your time reading an article, only to discover...