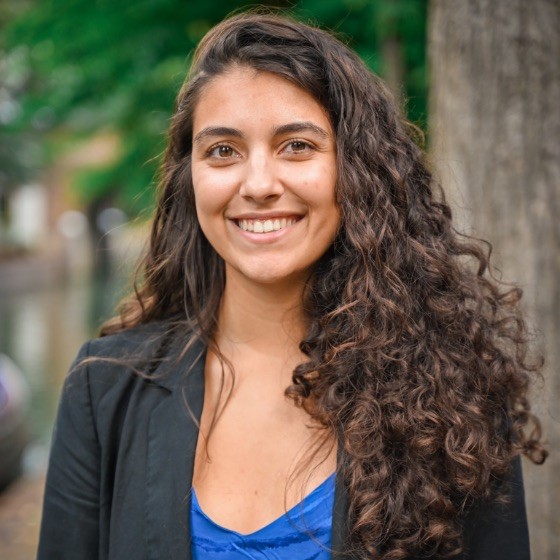 If you've been following the news lately, you've probably noticed that the public keeps clashing with experts. Be it in government or science - the people know best. No wonder, then, that the entertainment business is facing similar issues.

His research made headlines because a critic-audience divide is pretty much unheard of in the film industry. In fact, movie studios have feared critics' influence on audiences ever since movie review platform Rotten Tomatoes emerged in 1998. But if 2022 is any indication of what's to come, critics might soon be out of a job.

In this article, we'll investigate how wide the gap between movie critics and audiences really is, how it came about, and what the dynamics might mean for the future of film criticism.

Do Movie Fans and Critics See Eye to Eye?

Shaw first analyzed critic and audience ratings of the last two decades. He used user data from review websites IMDb, Metacritic, and Rotten Tomatoes. The results showed that the divide between critics and audiences has grown in recent years, but reached a high point in 2022. 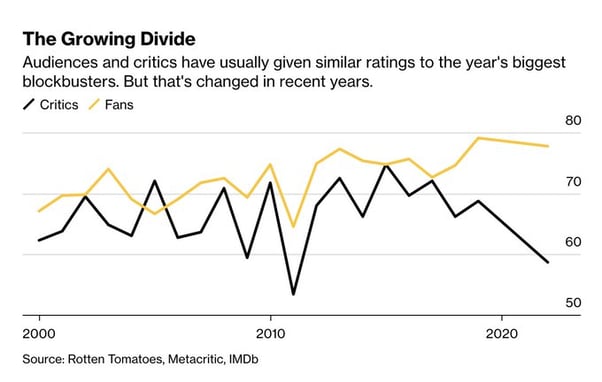 There is a stark contrast with preceding years, where the average difference in ratings was about 5 points. This year, it increased to 19. 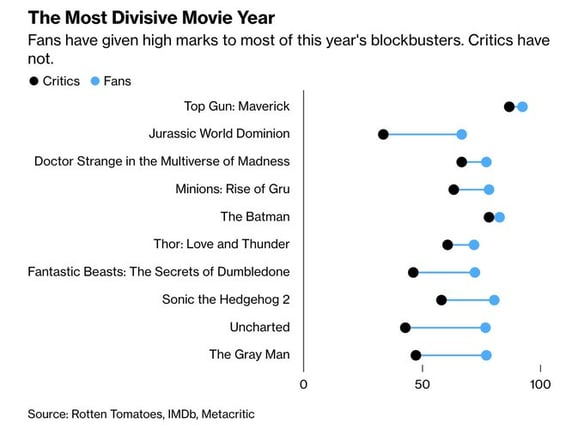 Are We Seeing the Same Thing?

As clear as Shaw's analysis is, there might be some problems with his methodology. After all, IMDb, Metacritic and Rotten Tomatoes use different metrics to calculate their score.

While it's reasonable to say that the IMDb and Metacritic scores are similar enough to compare them, anyone who's ever taken an 'Intro to Statistics' class can tell that the Rotten Tomatoes score is a little out of place.

'Liking' a movie is inherently subjective. A critic could be blown away by one movie and simply enjoy another, but the so-called 'Tomatometer' would have no option to differentiate between those different reviews. Instead of relying on objective factors, Rotten Tomatoes encourages subjective reviews that are highly linked to the person’s own preferences – regardless of the movie.

Although Shaw's analysis includes the aggregated average Rotten Tomatoes score, which is expressed as a percentage and thus looks like the IMDb and Metacritic score, it is still not the same thing!

The score relates to the number of reviewers that 'liked' the particular movie. It's therefore a measure of frequency, not value judgment. This makes its inclusion in Shaw's analysis questionable at least.

Why Does It Matter?

This deep dive into the methodological considerations of this particular Bloomberg author may come off as pointless nitpicking. But as the famous phrase goes: "there are three types of lies: lies, damned lies, and statistics". So let's take a look at a comparable study to make sure this gap is indeed happening.

The work of film data researcher Stephen Follows shows that there is indeed a gap between critic and audience scores, and it has actually been widening for an even longer time than Shaw's article shows! After cross-referencing IMDb and Metacritic data, Follows identified a strong, significant, and steady correlation between average audience and critic ratings. This is illustrated in the chart below. 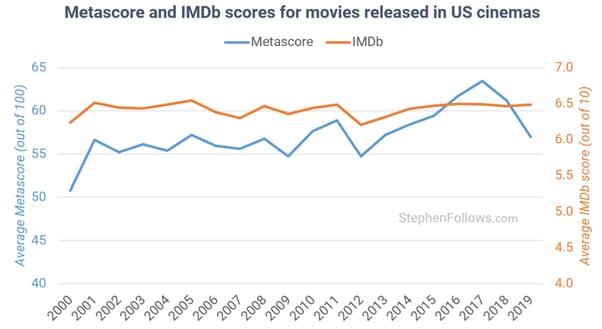 To be even more precise, Follows also calculated the level of correlation. You can see this in the graph below, with zero meaning no correlation and one meaning perfect positive synchronization. 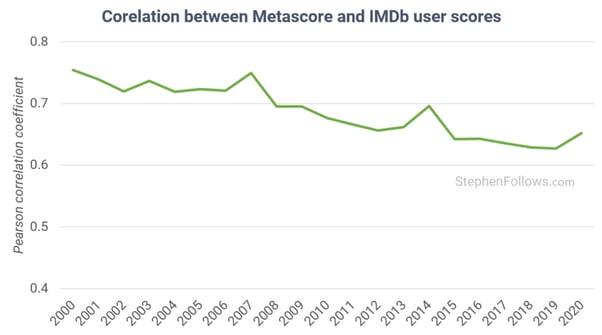 If you look closely at the green line, you can see it declining over time. This indicates that the gap between critics and audiences is indeed widening.

I should note that Follows only analyzed data from 2000 to 2019, meaning that the effects of the Covid-19 pandemic were not included in this picture.

How Can the Change In Trust Be Explained?

Now that we've established how wide the gap between movie critics and audiences really is, we can look at ways to explain this change. Three key developments could have made it possible.

1. The Way We Watch Movies Has Changed

As discussed, there's a gap between Follows' and Shaw's analysis, which means that there's no data from the years 2020 and 2021. It's not difficult to imagine why.

For those who do need a refresher: the Covid-19 pandemic has hit the movie industry with brutal force. Hundreds of people sitting together in a dark theater was out of the question. Therefore, movie studios had to get creative.

Rather than pushing the release date of their most anticipated projects, studios like Disney started releasing their movies on streaming platforms. In doing so, they made sure that audiences started watching movies in a different way.

As a result, movie fans became far more autonomous. Suddenly they had this huge film catalog at their fingertips - and were able to easily try out whatever movie they wanted.

As such, 'seeing a movie' provided little to no risks, which meant that audiences could ignore critical opinions and just go with their gut. Moreover, desperate people in quarantine were looking for any source of entertainment to pass their long days; movies, or any movie were a great solution.

2. An Overkill of Franchises

There's also a downside to the rise in streaming platforms. Stephen Follows notes that average ratings may have remained stable, but major differences were spotted across different genres. As shown in the chart below, critics rate documentaries higher than audiences. Audiences, in turn, seem to favor action movies. 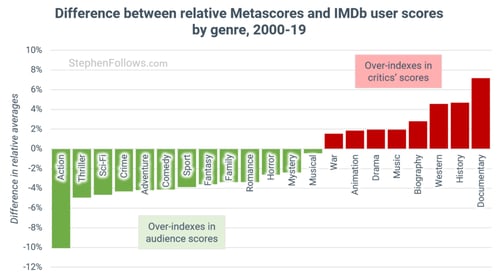 This contrast could play into what some have called franchise fatigue.

As it turns out, critics are over high-budget action movies. Sure, audiences might love stepping into another dimension to emerge themselves in the world of superheroes, high-speed car chases, and magic. But if you watch those movies for a living, the special effects might fall a little flat at some point.

At the same time, most franchises have incredibly loyal and passionate fan bases.  They buy merchandise or pay top dollar for theme parks and conventions. The only thing that stops them from seeing the movie, is the movie being canceled. Critics' reviews don't matter to them, because the franchise is part of their identity.

In a sense, such fans never trusted critics in the first place; they trust the brand instead.

It's sad but true. Despite audiences often rating movies similarly to critics, they don't seem to like them all that much. There's no rock-hard data to support this claim, but sentiments found on forum websites like Quora and Reddit are hard to ignore.

There are countless entries regarding the disdain towards movie critics on which commenters don't hold back. Among their responses are long-winded paragraphs and short messages full of curse words.

But the general sentiment seems clear. Critics are seen as pretentious and arrogant, or as the talking heads of large media conglomerates. In other words: they're not considered trustworthy. Consequently, people don't take their criticism that seriously.

Fortunately, the gap between movie critics and audiences is not as wide as it is often presumed. However, that doesn't mean that they always see eye to eye, nor that critics are all that influential. Audiences seem to make up their own minds, regardless of what some prestigious writer has to say about it.

So, does that mean that film critics will soon be out of a job? Not necessarily.

The emergence of streaming platforms may have diminished audiences' dependence on critical opinions, but that doesn't mean it will always stay this way. After all, the oversaturation of the film market will likely start to annoy audiences as well.

Tara has a keen interest in (academic) research, politics and journalism. Her goal is to understand knowledge that's (re)produced in ivory towers in a way that she can translate it into different contexts and for different audiences. She writes for Trust Signals and is editor-in-chief of the online magazine Feminer.

(Following is Chapter 5 of  Trust Signals: Brand Building in a Post-Truth World.)

Chapter 9: Choosing the Right Trust Signals in a Post-Truth World

(Following is Chapter 9 of  Trust Signals: Brand Building in a Post-Truth World.)