Tattoos as Trust Signals: What Message Does Your Ink Send Others?

A tattoo, a trust seal, and your website walk into a bar...

...and that's all I've got. I couldn't come up with a punchline that didn't sound like it came from a six-year-old just coming out of anesthesia.

But, there is an actual connection between tattoos and the trust seals you display on your website. I realize that this sounds like the intro to a really terrible TED talk, but stay with me.

I promise this will all make sense in the end (I'm aware that this is exactly what people say just prior to discussing very confusing conspiracy theories).

The Need For Trust Symbols

We live in a world that can, frankly, be a pretty scary place. We constantly encounter uncertainty in one form or another, whether that's financial, relational, physical, etc. Some uncertainties are life-altering, like a bad health diagnosis, while others are relatively trivial, like whether you should try out a new restaurant.

But regardless of the situation, our response is to always try to move from uncertainty to certainty. One of the ways we do this is by looking for visual shortcuts that give us a sense of whether something or someone is trustworthy.

Before you eat at a new place, you pull it up on Yelp and immediately look at how many stars it has. Before you buy a book from an unfamiliar author, you look to see whether anyone familiar has endorsed it. It's why upcoming movie trailers and posters always contain that award symbol, no matter how ridiculous the award. 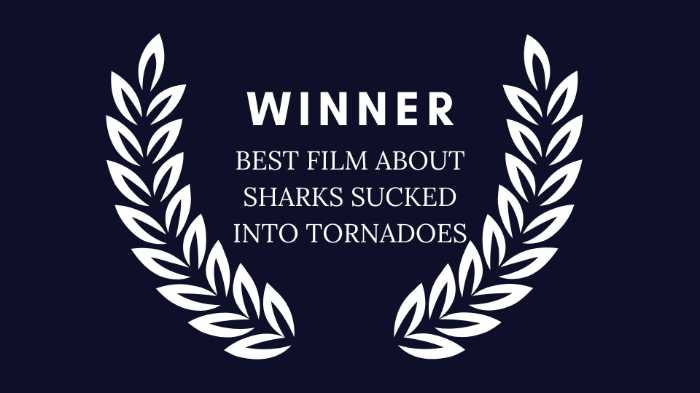 And, it's one reason why people get tattoos. A tattoo is a symbol that represents something important to the individual. It may be a particular value, person, word, or date. One of the purposes of a tattoo is to communicate this important thing to others who will see the tattoo.

For example, if a U.S. Marine gets the motto "Semper Fidelis" (Always Faithful) tattooed on their arm, it suggests that they value faithfulness, loyalty and honor. Anyone familiar with the motto who sees the tattoo immediately knows something about what's most important to the Marine. 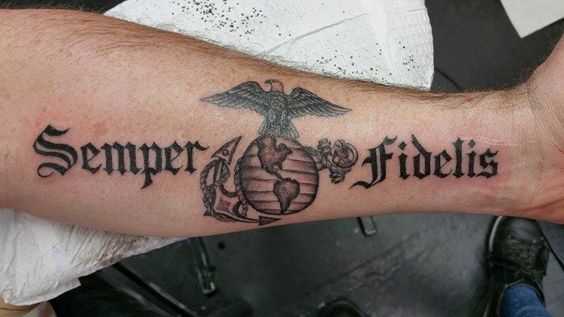 You could say that the tattoo is a trust symbol, of sorts. The owner wants to give others an idea of what to expect when they interact with him.

Of course, not all tattoos communicate such noble values. 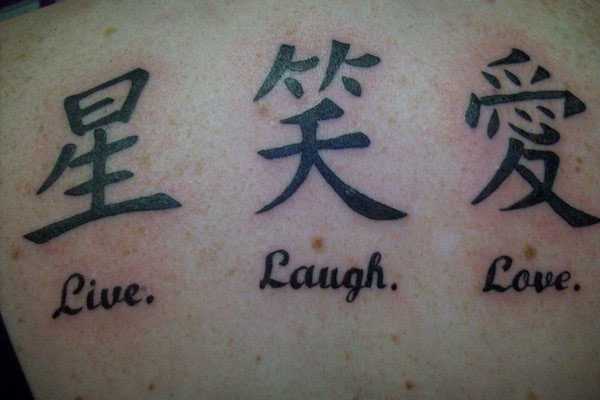 Though the words of this tattoo are innocuous enough, what many people assume when they see it is:

Now, some, none, or all of these things may be true. But the point is that symbols convey meaning and we look to symbols to help us make sense of the world.

Consider this tattoo of a compass sitting atop a map. 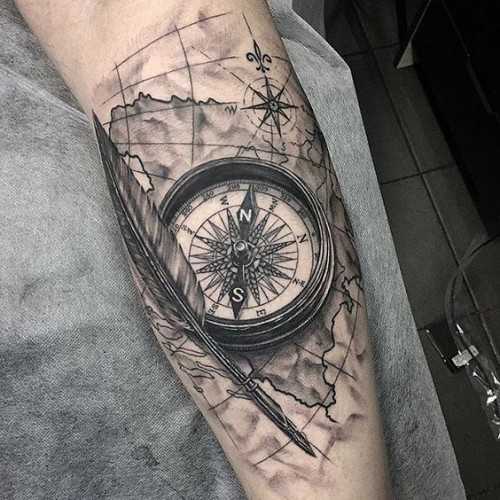 Even though I don't know the owner of the tattoo, I can make some relatively educated guesses about him. A compass often symbolizes adventure and travel, which makes sense when combined with the map. Assuming this is the case, it also suggests something of his personality: brave, willing to explore the unknown, an adventurer.

Obviously, I don't know if these things are true. However, given that he chose a compass and map, which are very symbolic of travel and adventure, I imagine at least some of my initial guesses are correct.

Sometimes, there's absolutely no doubt about what a tattoo means. Like this nightmare right here. This guy really loves his Monster Energy drinks, to the point where he's willing to be a walking billboard for them. 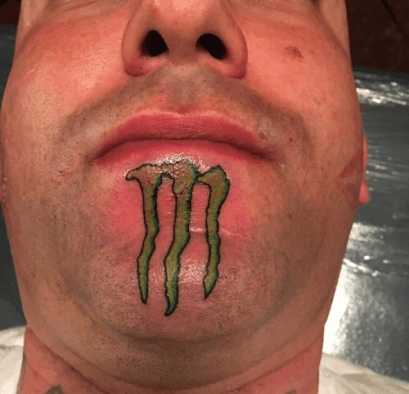 Three things come to mind when I see this tattoo:

I realize that I'm thinking the absolute worst and that he could be the nicest guy in the world. But it does require being in a very unique headspace to get such a tattoo—and that headspace usually isn't especially positive.

Fortunately, most tattoos aren't so emotionally jarring as the one above. This tattoo features two well-known religious symbols (cross and rosary beads) that are significant to many people around the world. 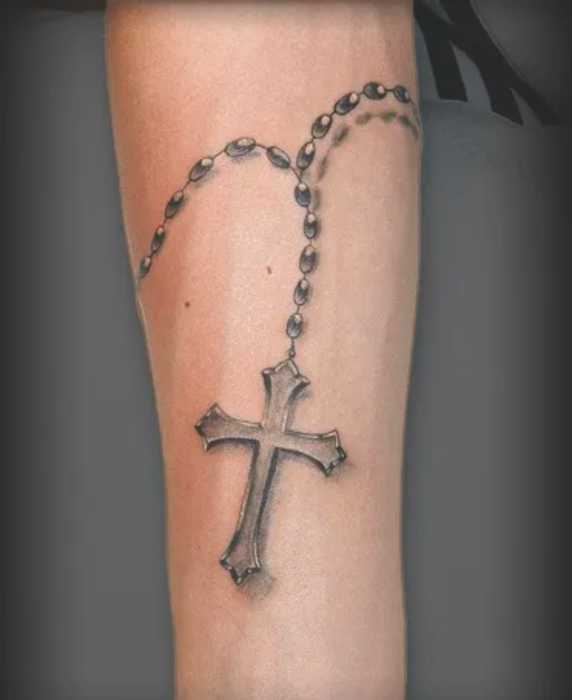 Anyone seeing the tattoo would immediately assume that faith, and its associated virtues, are very important to the individual.

By now, you get the point. Tattoos, like other types of symbols, are a shorthand way of expressing a larger, important point. If a picture is worth a thousand words, a tattoo can communicate a lifetime of beliefs, emotions, memories, and values.

For fun, let's look at one more tattoo and what it might represent. If you played video games in the '90s, as I did, this image of Ryu from the game "Street Fighter" probably makes you feel nostalgic for the days when your biggest problem in life was a Nintendo cartridge not working properly. 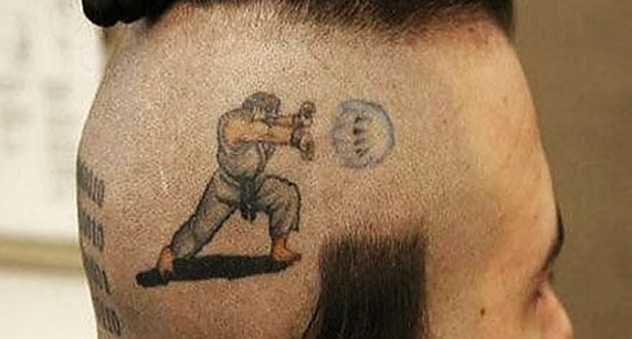 But this tattoo also symbolizes something else: nerd culture. To be clear, I don't mean "nerd" in the derogatory sense, as it's often used in middle school. Rather, I'm talking about people who are passionate about a particular subject/activity, like video games, movies, etc.

By having such an iconic character tattooed in such a prominent place, this guy is making a statement about a specific group he identifies with.

What Do Your Trust Symbols Say About Your Website?

Now let's connect the dots between tattoos and your website.

For good or bad, a tattoo often creates the first impression on others, and that first impression can be positive or negative. The same can be said for trust symbols, or the lack thereof, on your website.

People form an impression of your website within seconds of visiting it. They look for visual cues to tell them whether your site is trustworthy and they should progress further.

When it comes to the internet, particularly ecommerce, most people's initial reaction is wariness. A lack of trust. Everyone has at least one story of someone taking advantage of them online.

Trust must be earned, and one way of doing that is by prominently displaying well-known trust seals that convey specific meaning, in the same way that tattoos do.

A Better Business Bureau seal shows potential customers that you go above and beyond to provide your customers with an outstanding experience. A TrustedSite seal reassures people that their information is safe when they make a purchase on your website. Real customer reviews prove that your product or service delivers on its promise to do what it says.

Each of these symbols serves to reassure your website visitors that they are in, for lack of a better term, a safe space. The trust symbols and the values associated with them help potential customers orient themselves. When they see trust badges for payment types they regularly use, it allows them to make connections to other positive online buying experiences they've had using those same payment methods.

For example, when someone sees the Visa symbol, they might think, I always pay with a Visa and I've never had any problems before. And even if an issue does arise, I know that Visa promises to protect their customers. So I'm safe here.

On the flip side, if someone visits your website and doesn't see any familiar trust symbols, that raises an immediate red flag. They may not even be consciously aware of it, but when they scan your site and fail to find any familiar visual cues, it creates uncertainty, and if someone feels uncertain about your website, there's a good chance they'll take their business elsewhere.

The data on shopping cart abandonment proves this point. There is a direct connection between displaying trust seals on your website and increased conversion rates. They increase the level of trust a person feels with your website and business, and more trust translates into more conversions.

Trust symbols are like tattoos for your website. So, what are your website "tattoos" saying to visitors? Are they communicating trustworthiness, or, like the Monster Energy tattoo on the chin, do they make people want to leave as fast as possible?

When getting a tattoo, it's important to choose wisely, because your choice has real-world consequences. The same can be said for using trust symbols on your website.

Stephen Altrogge is a writer for Trust Signals.

Tell Your Superhero Story on Your "About Us" Page

Have you ever wondered why so many superhero movies are "origin stories" -- focused on that moment...

Want Your Website Visitors to Trust You? Show Them Your Team

What are authentic, high-quality pictures on your website's "Team" page worth to your business? In...