What is "review gating" and why should you care about it?

Review gating is when a business attempts to first find out if a customer’s experience was positive or negative before asking for a review -- and then only asks for reviews from happy customers.  While it might seem natural to want to encourage only your customer advocates to leave reviews about you, review gating brings up ethical issues and can put you at odds with Google if you handle your review outreach strategy poorly.

Two years ago, Google updated its terms of service to discourage review gating in Google Reviews. The terms now say: "Don’t discourage or prohibit negative reviews or selectively solicit positive reviews from customers." Other review sites, as well as review management tools such as Birdeye and Podium, have issued statements in support of Google's position.

Many of the B2C-oriented review management tools, such as Birdeye, changed their methods of soliciting reviews on behalf of their customers after Google's policy change. Whereas before businesses could "pre-check customer sentiment in their review requests," Birdeye updated its interface to solicit reviews from all customers after they interacted with a business -- while offering an option for unhappy customers to contact the business directly rather than leaving a negative review.

Birdeye's template was changed to the following: 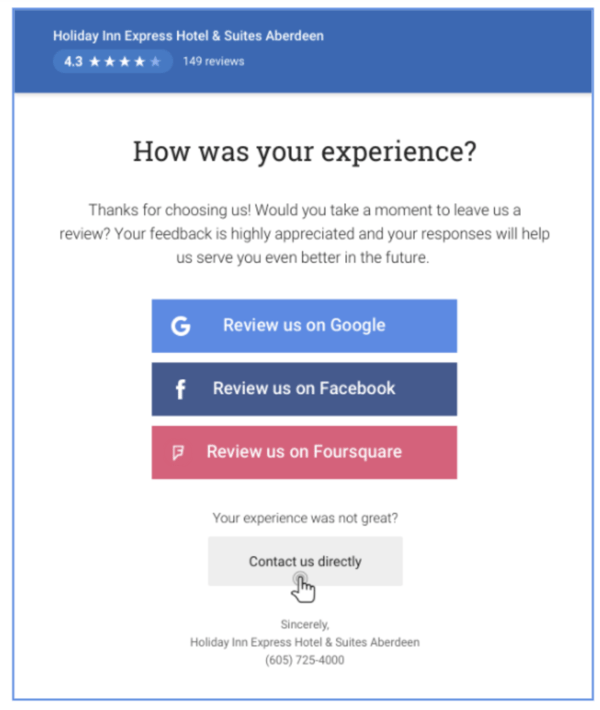 What has been the impact of Google's policy change? It hasn't been as rough for businesses as you might expect, for a few reasons:

The online review engine GatherUp, in fact, conducted a study and concluded that not gating reviews leads to more reviews but not significantly lower average star ratings:

GatherUp sought to answer the question, “Does review gating impact star-ratings?” It looked at “roughly 10,000 locations that were in our system the year before the switch with gating turned on and compared those same locations after gating was turned off.” It found that “gating had very little impact on the average star-rating but that NOT gating saw a significant increase in review volumes.”

In the period following the elimination of gating, Gather up saw review counts grow significantly in the aggregate, by almost 70%. Overall ratings on Google and Facebook went down slightly, but almost unnoticeably. On Google, for example, average star ratings declined from 4.66 to 4.59 without any filtering or selective solicitation. However, review volumes grew from over 32,000 to more than 53,000 on Google.

The bottom line is that reviews are more trusted when they seem authentic, which is the whole rationale driving Google's policy.

Let me speak from personal experience. I'm a fan of sports podcasts, and in particular, I listen to a number of podcasts in the Locked On network. I enjoy these shows, but I have to admit it bothers me when the podcasters promise to answer fans' questions in return for "five-star reviews" on iTunes. That's right -- if it's less than a five-star review, your question doesn't get answered.

To me -- and I'm sure to most listeners -- that immediately diminishes the credibility of reviews for these podcasts overall. If these podcasters offered to answer questions in return for leaving any review -- as opposed to only five-star reviews -- I suspect they would ultimately see that the reviews are still mostly quite positive, and would carry more credibility to boot. They would likely receive more reviews as well.

The most authentic, effective course for most B2C businesses -- and particularly local service businesses like restaurants, hair salons, car dealerships and pet grooming services -- is to simply ask each customer for a review immediately after their experience, before they ever leave your place of business.

When people are asked for a review face-to-face, they are less likely to leave a negative review. You should train your company's entire team to ask for a review so it’s always part of the process. Then, follow up with each customer with an email or text message afterwards that links to the site where you’d like their review to appear. It’s that simple.

Of course, for companies that sell products or services that require some time to evaluate, it’s presumptuous to ask for a review at the time of sale. Instead, it's best to set up a Net Promoter Score -- or NPS -- survey to check in with your customers periodically.  For many businesses, once per quarter is the right cadence for an NPS system.

A number of marketing tools, like HubSpot, link NPS surveys directly to your CRM, making them easier than ever to conduct by email. The NPS survey consists of a single question: “How likely are you to recommend us to others on a scale of 0 to 10?”  If a customer answers 9 or 10, they are considered a “promoter” of your product or business.

When you're dealing with a high-consideration purchase, such as enterprise software or a PR agency's services, I think it's reasonable to focus on promoters when soliciting reviews, and to direct non-promoters to customer service for follow-up.

The rationale for this approach is that you are generally soliciting those reviews one at a time through personal outreach, rather than through a tool like Birdeye. And the review sites for high-consideration purchases generally require more substantive reviews; satisfied customers are simply far more willing to spend the time to leave reviews of this nature.

At my agency, Idea Grove, we seek out reviews on Clutch, for example.  Clutch requires reviewers to participate in a 20-minute phone interview with the Clutch staff, which then turns that interview into a highly detailed review. It simply doesn't make sense to ask clients who are less than satisfied with your services to take that kind of time to submit a review.

The better course is to ask your unsatisfied customers to provide feedback directly to you, which you can then use to improve your services and, hopefully, make amends.