Third-party validation is one of the best ways to build trust online -- and one of the most powerful forms of validation is a positive review of your company on a review site such as Yelp, Tripadvisor or G2.

But these third-party sites aren't the only way to collect customer reviews. You can also solicit reviews directly on your website; these are known as first-party reviews. They've been common on high-volume e-commerce sites for years -- but now restaurants, consumer brands and other businesses are getting in on the action.

In addition to nudging visitors to buy your product once they're on your site, first-party reviews have another important benefit: Google likes them.

Here's an example of a first-party review widget (hosted by Brandify) on the website of a Timberland store in San Francisco:

After all, if you want customer reviews on your website, you can simply embed online reviews from third-party sites.

But it doesn't have to be a chore to collect first-party reviews using vendors like Yext and Brandify.  You can simply add a widget that asks for reviews from those who visit your site or purchase your product. These typically can be filtered to only showcase positive reviews -- although Google advises strongly against this kind of curation, a form of "review gating."

If you have a high volume of customers who visit your website, and these customers are generally happy with your product or service, first-party reviews can be a much easier way to collect feedback than programs to solicit third-party reviews.

You'll collect more reviews faster, and thanks to the bandwagon effect, the more reviews you receive, the more persuasive they will be for your prospects. 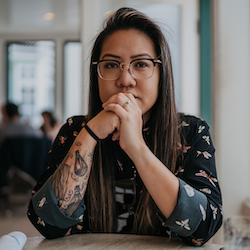 Build Trust By Embedding Google Reviews on Your Website

Google reviews today account for more than half of all reviews online, dominating the other big...

Online reviews are a...