Why Forbes Councils Is a No Brainer for Thought Leadership

As the blurring of earned and paid media accelerates, the once bright line between editorial content and advertising is rapidly fading. Unfortunately for journalistic purists, most news consumers appear to be unconcerned about this trend -- believing they are perfectly capable of distinguishing between what information is credible and what isn't.

Once again, the gatekeepers lose and the crowd wins.

While many public relations practitioners -- like most journalists -- bemoan this trend, the PR agency's first obligation is to serve its clients, using the tools that best help clients reach their goals today. That's why augmenting earned media programs with a Forbes Councils membership is a no-brainer for thought leadership marketing campaigns (whether B2B or B2C thought leadership) in 2022.

What is called "native advertising" or “sponsored content” today used to be called “advertorial.” In the old days, advertorial content was often pretty horrible. It was thinly veiled advertising and lacked the same quality standards as editorial content -- so much so that it stood out like a sore thumb. It was also clearly labeled as advertorial, further separating it from earned media content.

Particularly since the emergence of BuzzFeed in 2013, native advertising has become far more sophisticated and helpful to readers, which in turn has reduced its stigma. And while most outlets still label their sponsored content as such, it now blends in much more effortlessly with the editorial copy around it.

Put another way, as native advertising has shed its stigma, it has gained audience trust.

Forbes Councils, managed by the Community Company on behalf of Forbes, further elevates sponsored content by making it more than a simple pay-for-play transaction. Forbes Councils calls itself an "exclusive membership organization" in which the opportunity to publish content on Forbes.com is one of the benefits. As Forbes puts it:

Forbes Councils is an invitation-only organization where top executives and entrepreneurs like you build professional skills and gain connections and visibility on Forbes.com. Members are each grouped into a relevant council to ensure maximum benefit for the community as a whole.

The membership fee, at a little more than $2,000 annually, includes virtual networking and executive coaching, but the primary benefit is appearing on the Forbes website:

Forbes Councils provides exclusive opportunities to publish on Forbes.com, setting you apart as a bold voice in your industry. Take this opportunity to craft the narrative around yourself and your company on Forbes.com.

The Value of Visibility Through Forbes Councils

In addition to being an ingenious business model, Forbes Councils is also far more accessible to midsize and smaller businesses than many brand-name sponsored content programs. Many of the top outlets won't work with a company without an investment of $50,000 or more.

And it's hard to argue the value of the visibility and credibility that Forbes provides. The modest annual investment earns you the opportunity to publish as many as 10 to 12 articles per year with your byline on the Forbes website. These articles appear in Google News results and in LinkedIn's Mentioned in the News, earning the authority and trust that come with those placements. 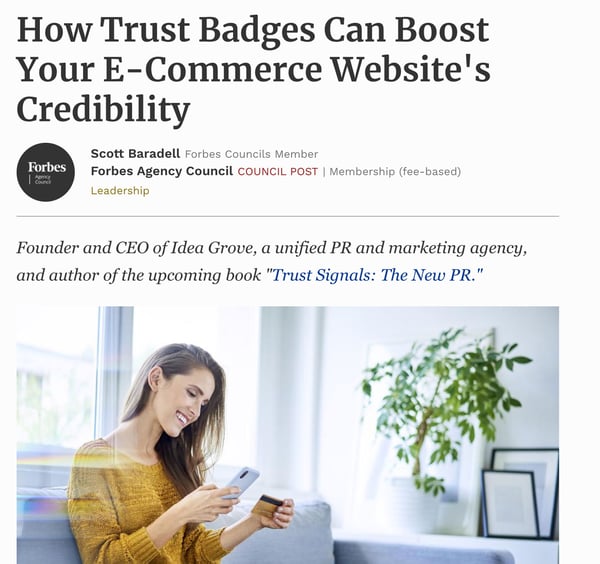 There is also the opportunity to appear as often as several times per month in "expert panels" -- roundup stories on topics relevant to your field. 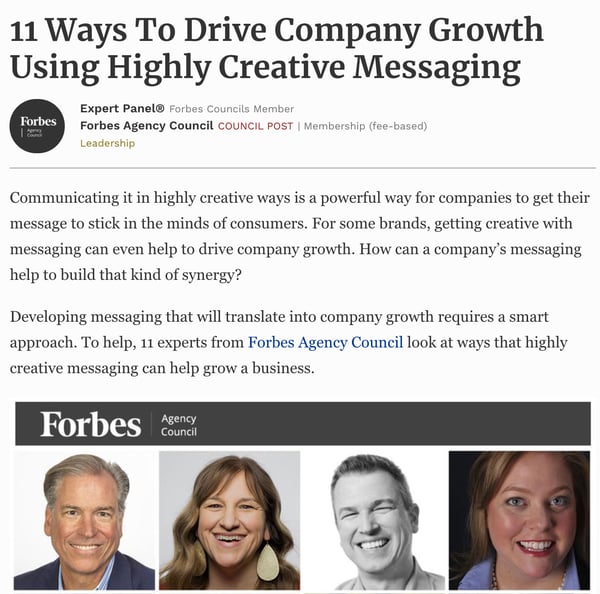 Keep in mind that with both the bylined articles (a.k.a., guest posts or contributed articles) and the expert panels, Forbes doesn't guarantee that it will publish your content if it doesn't meet Forbes' standards. Indeed, Forbes Councils' editors may kick back your articles for multiple rounds of revisions to make sure they are non-promotional, meet quality standards, and are deemed to be genuinely helpful to readers.

This is very different from the advertorial approaches of days gone by. For this reason, I prefer to call Forbes Councils "special-access media" or even "earned media plus" rather than "sponsored content."

The Forbes Councils model has been so successful that the Community Company has launched a similar program with local business journals in cities nationwide, called the Business Journals Leadership Trust, as well as programs with Newsweek, Rolling Stone and Fast Company.

Trust in a Post-Truth World

Will the AP Stylebook Be the Next Casualty of the Trust Multiverse?

“Mistress has been canceled, go figure! Who would’ve thought that mistresses would be canceled?"

Thought Leadership on Quora: How to Get Started

Nearly 60 percent of B2B marketing executives name “positioning our company as a thought leader” as...